Linda Cristal (pronounced "Cree-stal", IPA [kristal]); born Marta Victoria Moya Burges; February 23, 1934, Rosario, Argentina) is a retired Argentine-American actress. Her first English-language role was the part of Margarita in the 1956 Western film Comanche, directed by George Sherman and starring Dana Andrews. In 1960, John Wayne asked her to play the part of Flaca in his epic The Alamo. In the 1960-61 television season, Cristal appeared as a female matador in NBC's The Tab Hunter Show. In 1961, she starred with James Stewart in the western Two Rode Together. She guest-starred in the 1964 Voyage to the Bottom of the Sea episode "City Beneath the Sea." She semi-retired from the business after that to raise her two children. She was coaxed out of retirement when she became the last cast member to be added to the NBC series The High Chaparral (1967-1971). She later appeared in such popular television series as Bonanza, Barnaby Jones and The Love Boat. After that, she took assignments only as the notion struck her favorably, such as the Charles Bronson 1974 action film Mr. Majestyk. 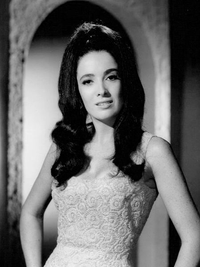