Montero Lamar Hill (born April 9, 1999), known by his stage name Lil Nas X (/nɑːz/ NAHZ), is an American rapper and singer. He rose to prominence with the release of his country rap single "Old Town Road", which first achieved viral popularity in early 2019 before climbing music charts internationally and becoming diamond certified by November of that same year. "Old Town Road" spent 19 weeks atop the US Billboard Hot 100 chart, becoming the longest-running number-one song since the chart debuted in 1958. Several remixes of the song were released, the most popular of which featured country singer Billy Ray Cyrus. Lil Nas X came out as gay while "Old Town Road" was atop the Hot 100, becoming the only artist to do so while having a number-one record. Following the success of "Old Town Road", Lil Nas X released his debut extended play, titled 7, which spawned two further singles⁠, with "Panini" peaking at number five and "Rodeo" (featuring Cardi B or Nas) peaking at number 22 on the Hot 100. His debut studio album, Montero (2021), was supported by the chart-topping singles "Montero (Call Me by Your Name)" and "Industry Baby" (with Jack Harlow) and the top-ten single "Thats What I Want". Lil Nas X was the most-nominated male artist at the 62nd Annual Grammy Awards, where he ultimately won awards for Best Music Video and Best Pop Duo/Group Performance. "Old Town Road" earned him two MTV Video Music Awards including Song of the Year, and the American Music Award for Favorite Rap/Hip Hop Song; Lil Nas X is also the first openly LGBT Black artist to win a Country Music Association award. Time named him as one of the 25 most influential people on the Internet in 2019, and he was named on the Forbes 30 Under 30 list in 2020. 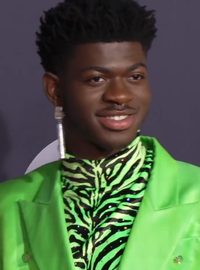 image credit
Lil Nas X by Cosmopolitan UK, is licensed under cc-by-3.0, resized from the original.