William John Paul "Liam" Gallagher (born 21 September 1972) is an English musician, singer, and songwriter. He is best known as the lead vocalist of the rock band Oasis. Gallagher's erratic behaviour, distinctive singing style, and abrasive attitude have been the subject of commentary in the press. He remains one of the most recognisable figures in modern British music.Although his elder brother Noel Gallagher wrote the majority of Oasis's songs, Liam has penned the singles "Songbird" and "I'm Outta Time", along with a string of album tracks and B-sides. Since Noel's departure from Oasis in August 2009, he has continued making music with ex-Oasis members Gem Archer, Andy Bell, and drummer Chris Sharrock, recording under the band name Beady Eye.Gallagher was voted the greatest frontman of all time in a 2010 UK Poll for Q magazine. 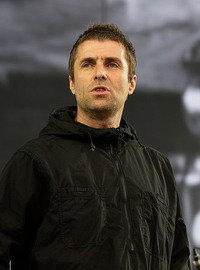 image credit
Liam Gallagher by Thesupermat, is licensed under cc-by-sa-4.0, resized from the original.