LeSean Kamel McCoy (born July 12, 1988), nicknamed "Shady", is an American football running back for the Philadelphia Eagles of the National Football League (NFL). He played college football for the University of Pittsburgh, and was chosen by the Eagles in the second round of the 2009 NFL Draft.McCoy attended Bishop McDevitt High School in Harrisburg, PA from 2002-2006. In 2013, McCoy led the NFL in rushing yards with 1,607 rushing yards as of week seventeen, shattering the team's individual rushing yards in a season record that stood for 34 years. 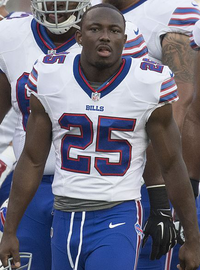 image credit
LeSean McCoy by Keith Allison, is licensed under cc-by-sa-2.0, resized from the original.