Margaret LeAnn Rimes Cibrian (born August 28, 1982), known professionally as LeAnn Rimes, is an American country and pop singer. Known for her rich vocals, Rimes rose to stardom at age 13 following the release of the Bill Mack song "Blue", becoming the youngest country music star since Tanya Tucker in 1972.Rimes made her breakthrough into country music in 1996 with her debut album, Blue, which reached number one on the Top Country Albums chart and was certified multiplatinum in sales by the Recording Industry Association of America (RIAA). Rimes has also written four books: two novels and two children's books. 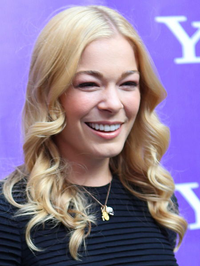 image credit
LeAnn Rimes by Yahoo! Blog, is licensed under cc-by-2.0, resized from the original.