Laurence George Luckinbill (born November 21, 1934) is an American actor, playwright, and director. He has worked in television, film, and theatre, doing triple duty in the latter by writing, directing, and starring in stage productions. He is probably best known for penning and starring in one-man shows based upon the lives of United States President Theodore Roosevelt, author Ernest Hemingway, and famous American defense attorney Clarence Darrow, starring in a one-man show based upon the life of United States President Lyndon Baines Johnson, and for his portrayal of Mr. Spock's half-brother, Sybok, in the film Star Trek V: The Final Frontier. 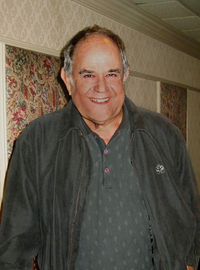 image credit
Laurence Luckinbill by Ronzoni, is licensed under cc-by-sa-3.0, resized from the original.