Lauren Tsai (born February 11, 1998), also known as Lala (ララ), is an American illustrator, model, and actress. She is best known to audiences for her appearance in the Fuji TV and Netflix series Terrace House: Aloha State. She made her acting debut in the third and final season of Legion, a television series based on the Marvel Comics character of the same name. 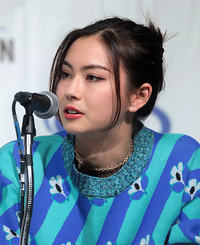 image credit
Lauren Tsai by Gage Skidmore, is licensed under cc-by-sa-3.0, resized from the original.