Laura Leggett Linney (born February 5, 1964) is an American actress (film, television, and theatre) and singer. She is most well known for her performances in films such as The Truman Show, Mystic River and Kinsey, among others. She also played the lead role of Cathy Jamison in the Showtime series The Big C, which completed its fourth and final season in May 2013.During her career she has received four Emmy Awards, two Golden Globe Awards and a Screen Actors Guild Award. Additionally she has been the recipient of three Academy Award nominations and three Tony Award nominations. 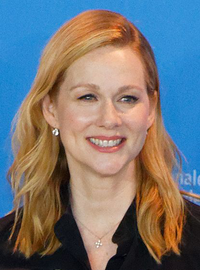 image credit
Laura Linney by Maximilian Bhn, is licensed under cc-by-sa-4.0, resized from the original.