Laura Dawn Bailey (born May 28, 1981) is an American voice actress, actress and voice director who provides voices for a number of English-language versions of Japanese anime films and television series as well as voice roles in video games and cartoons. Her notable roles include Maka Albarn in Soul Eater, Kid Trunks in Dragon Ball Z, Tohru Honda in Fruits Basket, Lust in Fullmetal Alchemist, and Shinnosuke "Shin" Nohara in Crayon Shin-Chan, the last of which she also served as the line producer. In video games, she provides the voice of Rayne in the BloodRayne series, Chun-Li in the newer titles of the Street Fighter series, The Female Protagonist in Persona 3 Portable, Rise Kujikawa in the Persona 4 series, Blaze the Cat in Sonic the Hedgehog series, Lucina in Fire Emblem Awakening, Serah Farron in the Final Fantasy XIII series, Serana in The Elder Scrolls V: Skyrim – Dawnguard, Raiders in "Fallout 4", Spartan Olympia Vale in Halo 5: Guardians, Fiona in Tales from the Borderlands and Jaina Proudmoore in World of Warcraft. 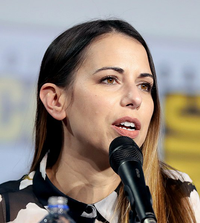