Lawrence "Larry" Page (born March 26, 1973) is an American Business magnate and computer scientist who is the co-founder of Google, alongside Sergey Brin. On April 4, 2011, Page succeeded Eric Schmidt as the chief executive officer of Google. As of 2014, Page's personal wealth is estimated to be US$32.3 billion, ranking him #19 on the Forbes list of billionaires.Page is the inventor of PageRank, the foundation of Google's search ranking algorithm, and he and Brin own approximately 16 percent of Google's stock. 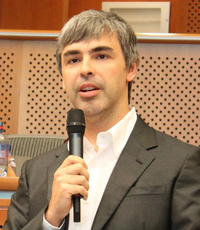 image credit
Larry Page by Stansfield PL, is licensed under cc-by-sa-3.0, resized from the original.