Lawrence Gene "Larry" David (born July 2, 1947) is an American actor, writer, comedian, and television producer. He was the co-creator, with Jerry Seinfeld, of the television series Seinfeld, and was its head writer and executive producer from 1989 to 1996. David has subsequently gained further recognition for the HBO series Curb Your Enthusiasm, also created by David, in which he stars as a semi-fictionalized version of himself.David's work won him a Primetime Emmy Award for Outstanding Comedy Series in 1993. Formerly a standup comedian, David went into television comedy, writing and starring in ABC's Fridays, as well as writing briefly for Saturday Night Live. He has won two Primetime Emmy Awards as well as being voted by fellow comedians and comedy insiders as number 23 of the greatest comedy stars ever in a British poll to select The Comedian's Comedian. 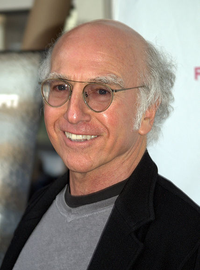 image credit
Larry David by David Shankbone, is licensed under cc-by-3.0, resized from the original.