Kylie Ann Minogue, OBE (/ˈkaɪliː mɨˈnoʊɡ/; born 28 May 1968), often known simply as Kylie, is an Australian singer-songwriter and actress, working and living in London. After beginning her career as a child actress on Australian television, she achieved recognition through her role in the television soap opera Neighbours, before beginning her career as a recording artist in 1987.Minogue has achieved worldwide record sales of more than 70 million, and has received notable music awards, including multiple ARIA and Brit Awards and a Grammy Award. Minogue later confirmed that she would not be returning to The Voice UK for the fourth series due to the dates clashing with her tour. 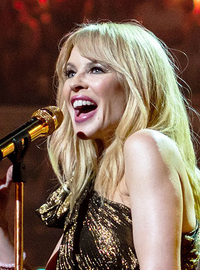 image credit
Kylie Minogue by Raph_PH, is licensed under cc-by-2.0, resized from the original.