Kylie Kristen Jenner (born August 10, 1997) is an American reality television star and model. She is known for appearing on the E! reality TV show Keeping Up with the Kardashians that she shares with her family.In 2013, Jenner released an exclusive collection under PacSun, designed alongside her sister, Kendall. 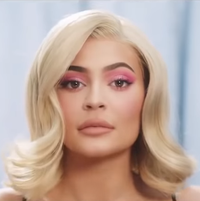 image credit
Kylie Jenner by Hayu, is licensed under cc-by-3.0, resized from the original.