Kyle Merritt MacLachlan (/məˈɡlɑːklən/; born February 22, 1959) is an American actor. MacLachlan is best known for his roles in cult films such as Blue Velvet as Jeffrey Beaumont, as Zack Carey in Showgirls and as Paul Atreides in Dune. He has also had prominent roles in television shows including appearing as Special Agent Dale Cooper in Twin Peaks, Trey MacDougal in Sex and the City, Orson Hodge in Desperate Housewives, The Captain in How I Met Your Mother, and as the Mayor of Portland in Portlandia.MacLachlan is a Golden Globe Award-winning and two-time Emmy Award-nominated actor. 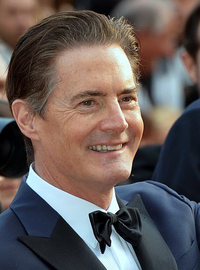 image credit
Kyle MacLachlan by Georges Biard, is licensed under cc-by-sa-3.0, resized from the original.