Kurt Leon Sutter (born May 5, 1960) is an American screenwriter, director, producer, and actor. He worked as a producer, writer, and director on The Shield, and appeared on the show as hitman Margos Dezerian. Sutter is also the creator of Sons of Anarchy on FX and writes, produces, directs, and plays incarcerated club member Otto Delaney on the series. Sutter spent time with members of an outlaw club in Northern California as research for Sons of Anarchy. Sutter's wife, actress Katey Sagal, is also one of the show's lead actresses. 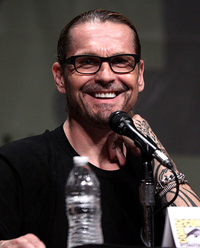 image credit
Kurt Sutter by Gage Skidmore, is licensed under cc-by-sa-3.0, resized from the original.