Kristen Johnston (born September 20, 1967) is an American stage, film, and television actress. She is most famous for her two-time Emmy Award-winning role as Sally Solomon in the television series 3rd Rock from the Sun. She also starred as Wilma Flintstone in The Flintstones in Viva Rock Vegas. She stars as Holly Franklin in the sitcom The Exes. 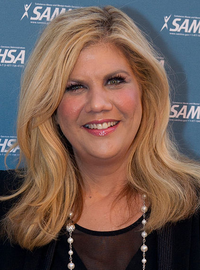