Nathaniel Thomas Wilson (born July 20, 1968), better known by his stage name Kool G Rap (or simply G Rap, and originally Kool Genius of Rap) is an American rapper. He hails from the Corona neighborhood of Queens, New York City. He began his career in the mid-1980s as one half of the group Kool G Rap & DJ Polo and as a member of the Juice Crew. He is often cited as one of the most influential and skilled MCs of all time as he is a pioneer of mafioso rap/street/hardcore content and multisyllabic rhyming. On his album The Giancana Story, he stated that the "G" in his name stands for "Giancana" (after the mobster Sam Giancana), but on other occasions he has stated that it stands for "Genius".He has also been cited as a major influence to some of hip-hop's most critically acclaimed figures such as The Notorious B.I.G., Nas, Eminem and Jay-Z, as well as many underground rappers. 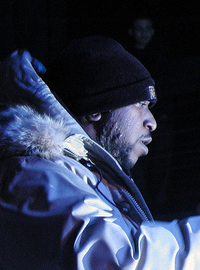 image credit
Kool G Rap by Kanamedia, is licensed under cc-by-2.5, resized from the original.