Mikayla Simpson (born 16 February 2000), better known as Koffee, is a Jamaican reggae singer, songwriter, rapper, deejay and guitarist from Spanish Town, Jamaica. She released her debut single "Burning" in 2017, and in 2019 signed with Columbia Records. Her 2019 EP Rapture won the Grammy Award for Best Reggae Album at the 62nd Annual Grammy Awards, making Koffee the youngest person and only woman to be awarded in the Best Reggae Album category. 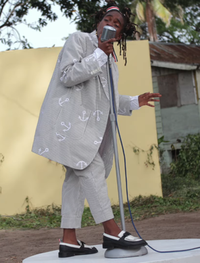 image credit
Koffee by Mykal Cushnie, is licensed under cc-by-3.0, resized from the original.