Kirsten Nelson (born October 3, 1970) is an American actress and director. Born in Oklahoma, though raised in Chicago, Nelson attended Northwestern University and became a founding member of Chicago's Roadworks Theatre Ensemble before moving to Los Angeles. She is perhaps best known for her starring role as Police Chief Karen Vick on Psych. Nelson’s career includes roles in Buffy the Vampire Slayer, The O'Keefes (as Ellie O’Keefe), Baby's Day Out, The Fugitive, Frasier, Ally McBeal, The West Wing, Just Shoot Me! and Boy Meets World. She is a Lutheran. 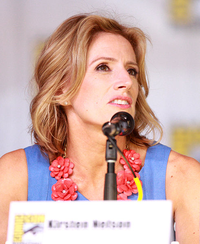 image credit
Kirsten Nelson by Gage Skidmore, is licensed under cc-by-sa-3.0, resized from the original.