Kirsten Elizabeth Rutnik Gillibrand (/ˈkɪərstən ˈdʒɪlɨbrænd/ KEER-stən JIL-ə-brand; born December 9, 1966) is an American politician and the junior United States Senator from New York, in office since 2009. Previously she served in the United States House of Representatives, representing New York's 20th congressional district, from 2007 to 2009. She is a member of the Democratic Party. military's "Don't Ask, Don't Tell" policy when she was in the House, during her first 18 months in the Senate Gillibrand was an important part of the successful campaign to repeal this. 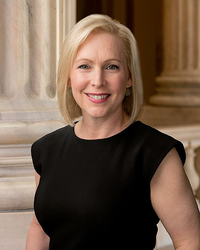