Kimila Ann "Kim" Basinger ( /ˈbeɪsɪŋər/ BAY-sing-ər, often mispronounced /ˈbæsɪndʒər/ BASS-in-jər; born December 8, 1953) is an American actress and former fashion model. She came to prominence in the 1980s with roles as Bond girl Domino Petachi in Never Say Never Again (1983), her Golden Globe-nominated role as Memo Paris in The Natural (1984), Elizabeth in Nine 1⁄2 Weeks (1986), and Vicki Vale in Batman (1989).In 1997, she won an Academy Award for Best Supporting Actress for her performance in L.A. Confidential. Other movies in which Basinger has starred include I Dreamed of Africa (2000) as Kuki Gallmann, 8 Mile (2002), and Cellular (2004). 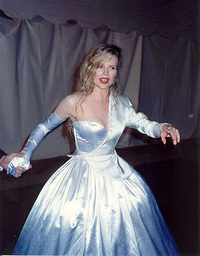 image credit
Kim Basinger by Alan Light, is licensed under cc-by-2.0, resized from the original.