Kiefer William Frederick Dempsey George Rufus Sutherland (born 21 December 1966) is a Canadian actor, film producer, and film director. He is best known for his portrayal of Jack Bauer on the Fox series 24, for which he won an Emmy Award, a Golden Globe Award, two Screen Actors Guild Awards, and two Satellite Awards. He also starred as Martin Bohm in the Fox drama Touch, and provided the English voice of Punished Snake (aka Big Boss) in the video games Metal Gear Solid V: Ground Zeroes, and the upcoming Metal Gear Solid V: The Phantom Pain. 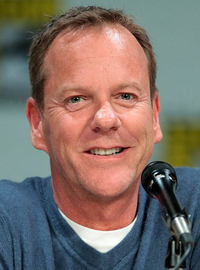 image credit
Kiefer Sutherland by Gage Skidmore, is licensed under cc-by-sa-2.0, resized from the original.