Alia Advani (born 31 July 1992), known professionally as Kiara Advani ([kɪˈjaːra əɽˈʋaːɳi]), is an Indian actress who works in Hindi and Telugu language films. After making her acting debut in the comedy film Fugly (2014), she played MS Dhoni's wife in the sports biopic M.S. Dhoni: The Untold Story (2016). She gained praise for playing a sexually unsatisfied wife in the Netflix anthology film Lust Stories (2018) and played the leading lady in the political thriller Bharat Ane Nenu (2018). Advani received wider attention for starring in the romantic drama Kabir Singh and the comedy Good Newwz, two of the highest-grossing Hindi films of 2019. This success continued with her roles in the 2021 film Shershaah, for which she was nominated for the Filmfare Award for Best Actress, and the 2022 films Bhool Bhulaiyaa 2 and Jugjugg Jeeyo. 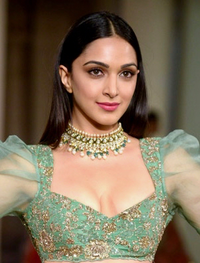 image credit
Kiara Advani by Bollywood Hungama, is licensed under cc-by-3.0, resized from the original.