Keyshia Cole Gibson (born October 15, 1982), known by her stage name Keyshia Cole is an American singer-songwriter, record producer and television personality. She was born in Oakland, California, and her career began when she met MC Hammer at the age of twelve and later met rapper Tupac Shakur. At the age of eighteen she moved to Los Angeles and was later introduced to A&M Records. Her second reality show, Family First premiered on October 9, 2012. 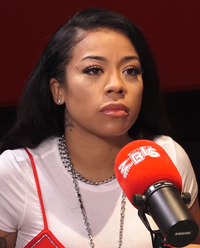 image credit
Keyshia Cole by wbls1075nyc, is licensed under cc-by-3.0, resized from the original.