Kevin Patrick Smith (born August 2, 1970) is an American screenwriter, actor, film producer, and director, as well as a popular comic book writer, author, comedian/raconteur, and podcaster. He came to prominence with the low-budget comedy Clerks (1994), in which he appeared as the character Silent Bob. Smith's first several films were mostly set in his home state of New Jersey, and while not strictly sequential, they frequently feature crossover plot elements, character references, and a shared canon described by fans as the "View Askewniverse", named after his production company View Askew Productions, which he co-founded with Scott Mosier. 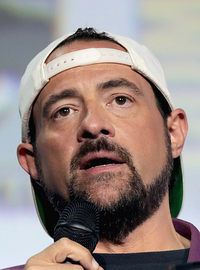 image credit
Kevin Smith by Gage Skidmore, is licensed under cc-by-sa-2.0, resized from the original.