Kerry Marisa Washington (born January 31, 1977) is an American actress. Since 2012, Washington has starred on the ABC drama Scandal, a Shonda Rhimes series in which Washington plays Olivia Pope, a crisis management expert to the President. In 2013, she gained wide public recognition for her role and was nominated for a Primetime Emmy Award for Outstanding Lead Actress in a Drama Series, Screen Actors Guild Award for Outstanding Performance by a Female Actor in a Drama Series, and a Golden Globe Award for Best Actress in a Television series. 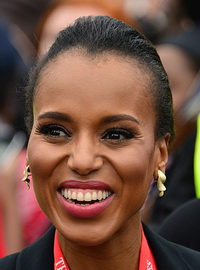 image credit
Kerry Washington by www.GlynLowe.com, is licensed under cc-by-2.0, resized from the original.