Keri Lynn Russell (born March 23, 1976) is an American actress and dancer. After appearing in a number of made-for-TV films and series during the mid-1990s, she came to fame for portraying the title role of Felicity Porter on the series Felicity, which ran from 1998 to 2002, and for which she won a Golden Globe Award. Russell has since appeared in several films including Mission: Impossible III (2006), Waitress (2007), August Rush (2007), Extraordinary Measures (2010), Dark Skies (2013), and currently stars in the FX television series The Americans. 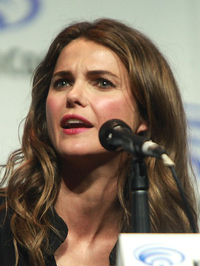 image credit
Keri Russell by Gage Skidmore, is licensed under cc-by-sa-2.0, resized from the original.