Kelis Rogers (/kəˈliːs/; born August 21, 1979), better known mononymously as Kelis, is an American singer-songwriter and certified chef. She has won Brit Awards, Q Awards, and NME Awards, and was nominated for two Grammy Awards and has released six regular studio albums so far. Outside her native United States, she had 10 top ten singles in the United Kingdom alone. Kelis appeared on Moby's Area One Tour, supported U2 on the European leg of their Elevation Tour, Britney Spears' The Onyx Hotel Tour and headlined her own All Hearts Tour with Robyn. 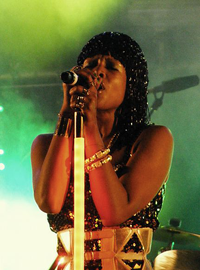 image credit
Kelis by Man Alive!, is licensed under cc-by-2.0, resized from the original.