Katherine Boyer Waterston (born March 3, 1980) is an American actress. Her film appearances include Michael Clayton, The Babysitters, Being Flynn, Night Moves, and Inherent Vice. She has appeared on television in series like Boardwalk Empire and on stage, most recently performing Off-Broadway in a revival of The Cherry Orchard. 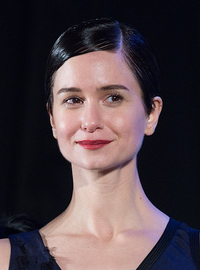 image credit
Katherine Waterston by Dick Thomas Johnson, is licensed under cc-by-2.0, resized from the original.