Catherine "Kate" Bush, CBE (born 30 July 1958) is an English singer-songwriter, musician and record producer. Her eclectic musical style and idiosyncratic vocal style have made her one of the United Kingdom's most successful solo female performers of the past 35 years.In 1978, at the age of 19, Bush topped the UK Singles Chart for four weeks with her debut single "Wuthering Heights", becoming the first woman to have a UK number one with a self-written song. She received the award from Queen Elizabeth II on 10 April 2013 at Windsor Castle. 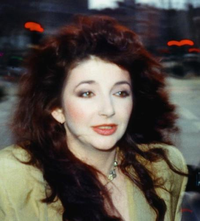 image credit
Kate Bush by here, is licensed under cc-by-sa-3.0, resized from the original.