Katherine von Drachenberg (born March 8, 1982), best known as Kat Von D, is a Mexican-born, American tattoo artist, model, musician and television personality. She is best known for her work as a tattoo artist on the TLC reality television show LA Ink, which premiered August 7, 2007, in the United States and ran for four seasons. 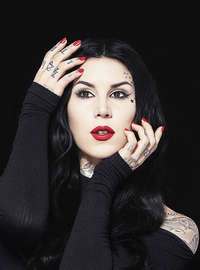 image credit
Kat Von D by Mariano Vivanco, is licensed under cc-by-sa-3.0, resized from the original.