Karl Guthe Jansky was born in what was then the Territory of Oklahoma where his father, Cyril M. Jansky, was Dean of the College of Engineering at the University of Oklahoma at Norman. Cyril M. Jansky, born in Wisconsin of Czech immigrants, had started teaching at the age of sixteen. He was a teacher throughout his active life, retiring as Professor of Electrical Engineering at the University of Wisconsin. He was an engineer with a strong interest in physics, a trait passed on to his sons. Karl Jansky was named after Dr. Karl E. Guthe, a Professor of Physics at the University of Michigan who had been an important mentor to Cyril M. Jansky. Karl Jansky's mother, born Nellie Moreau, was of French and English descent. Karl's brother Cyril Jansky Jr., who was ten years older, helped build some of the earliest radio transmitters in the country, including 9XM in Wisconsin (now WHA of Wisconsin Public Radio) and 9XI in Minnesota (now KUOM). Karl Jansky attended college at the University of Wisconsin–Madison where he received his BS in physics in 1927. In 1928 he joined the Bell Telephone Laboratories site in Holmdel, New Jersey. Bell Labs wanted to investigate atmospheric and ionospheric properties using "short waves" (wavelengths of about 10–20 meters) for use in transatlantic radio telephone service. As a radio engineer, Jansky was assigned the job of investigating sources of static that might interfere with radio voice transmissions. 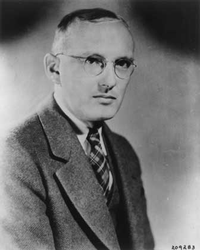 image credit
Karl Guthe Jansky by Saber1983, is licensed under cc-by-sa-3.0, resized from the original.