Karel Gott (born July 14, 1939, in Plzeň) is a Czech Schlager singer, and an amateur painter. He is considered the most successful male singer in former Czechoslovakia and currently in the Czech Republic; he was elected the Most Favorite Male Singer in the annual national poll Český slavík (English: Czech Nightingale) in total forty times, most recently in 2015. He also gained widespread fame in the German-speaking countries and is a fluent speaker of the language. Worldwide he has sold an estimated 50–100 million records with his songs, 23 million of them in the German-speaking market, and about 15 million in former Czechoslovakia and its successor states, the Czech Republic and Slovakia. Of his debut LP in Russia (Melodiya, 1977) there were sold over 5.5 million copies. 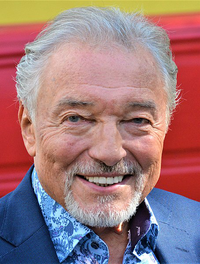 image credit
Karel Gott by David Sedleck, is licensed under cc-by-sa-4.0, resized from the original.