Julia Scarlett Elizabeth Louis-Dreyfus (/ˈluːiː ˈdraɪfəs/; born January 13, 1961) is an American actress, comedian and producer, known for her television work on Seinfeld, The New Adventures of Old Christine, and her current series Veep.Louis-Dreyfus broke into comedy as a performer in The Practical Theatre Company in Chicago, which led her to casting in the famed sketch show Saturday Night Live from 1982 to 1985. Her breakthrough came in 1990 with a nine-season run playing the character of Elaine Benes on Seinfeld, one of the most critically and commercially successful sitcoms of all time. Louis-Dreyfus received a star on the Hollywood Walk of Fame in 2010, and was inducted into the Television Academy Hall of Fame in 2014. 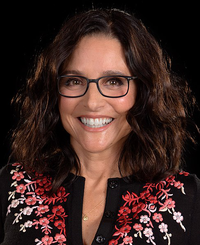 image credit
Julia Louis-Dreyfus by Neil Grabowsky, for the, is licensed under cc-by-2.0, resized from the original.