Julianna Grace LeBlanc (/ləˈblɒŋk/; born December 5, 2004), known professionally as both Annie LeBlanc and Jules LeBlanc, is an American YouTuber, actress, singer, and former gymnast. In December 2018, Business Insider called her one of the "most famous teens in the world." She appeared on the YouTube channel Bratayley from the age of four and has since gained an extensive online following of her own. LeBlanc was on the YouTube Red series We Are Savvy before going on to work with the Brat network, starring as Rhyme McAdams in Chicken Girls and its spinoff films and the titular character of A Girl Named Jo. On television, she plays Lex in the Nickelodeon buddy comedy series Side Hustle. 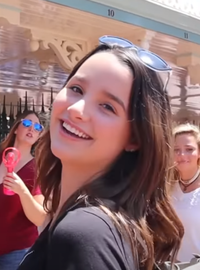 image credit
Jules LeBlanc by It's The Donnellys, is licensed under cc-by-3.0, resized from the original.