Joseph Hill "Joss" Whedon (/ˈhwiːdən/; born June 23, 1964) is an American screenwriter, film and television director, film and television producer, comic book author, composer and actor. He is the founder of Mutant Enemy Productions and co-founder of Bellwether Pictures. He is best known as the creator of the television series Buffy the Vampire Slayer (1997–2003), Angel (1999–2004), Firefly (2002–03), Dollhouse (2009–10) and Agents of S. In May 2013, Whedon was awarded an honorary Doctorate of Letters from Wesleyan University. 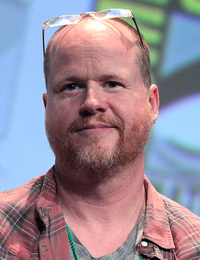 image credit
Joss Whedon by Gage Skidmore, is licensed under cc-by-sa-3.0, resized from the original.