Joshua Regnall "Josh" Stewart (born February 6, 1977) is an American actor best known for his role as Holt McLaren in the FX TV series Dirt and as Detective William LaMontagne, Jr in Criminal Minds. He was also cast as Brendan Finney in the final season of the NBC TV series Third Watch, as well as Barsad, Bane's right hand man, in Christopher Nolan's The Dark Knight Rises, the final film in The Dark Knight Trilogy. 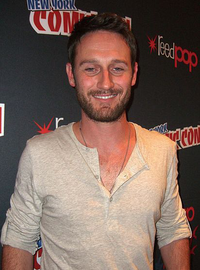 image credit
Josh Stewart by Luigi Novi, is licensed under cc-by-3.0, resized from the original.