Joshua Winslow "Josh" Groban (born February 27, 1981) is an American singer, songwriter, musician, actor, and record producer. His first four solo albums have been certified multi-platinum, and in 2007, he was charted as the number-one best selling artist in the United States with over 21 million records in the nation. To date, he has sold over 25 million records worldwide. Kelley, performing "You're Still You" for the 2001 season finale. 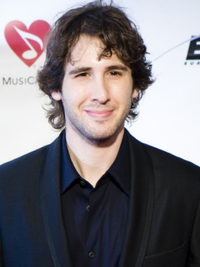 image credit
Josh Groban by Christopher Simon, is licensed under cc-by-2.0, resized from the original.