Jonathan "Jonah" Nolan (1976) is an English-American screenwriter, television producer, director and author. He is the creator of the science fiction television series Person of Interest (2011–2016) and Westworld (2016–present). He has collaborated on several films with his brother, director Christopher Nolan, who adapted Jonathan's short story "Memento Mori" (2001) into the film Memento (2000). Together, they co-wrote the mystery thriller The Prestige (2006), the superhero films The Dark Knight (2008) and The Dark Knight Rises (2012), and the epic science fiction film Interstellar (2014). 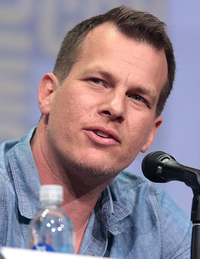 image credit
Jonathan Nolan by Gage Skidmore, is licensed under cc-by-sa-3.0, resized from the original.