Jonathan Kolia "Jon" Favreau(/ˈfævroʊ/; born October 19, 1966) is an American actor, director, screenwriter, voice artist, and comedian. As an actor, he is best known for his roles in Rudy, Swingers (which he also wrote), Very Bad Things, and The Break-Up. His notable directorial efforts include Elf, Iron Man, Iron Man 2, and Cowboys & Aliens. He also served as an executive producer on The Avengers and more recently, Iron Man 3. His most prominent television role was that of Pete Becker, Monica Geller's boyfriend during season three of the television sitcom Friends. 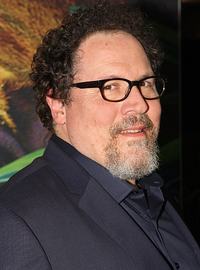 image credit
Jon Favreau by Eva Rinaldi, is licensed under cc-by-sa-2.0, resized from the original.