Joanna Noëlle Blagden Levesque (born December 20, 1990), better known by her stage name JoJo, is an American singer-songwriter and actress. Raised in Foxborough, Massachusetts, she performed in various singing competitions as a child, and after competing on the television show America's Most Talented Kids in 2003, she was noticed by record producer Vincent Herbert who asked her to audition for Blackground Records. JoJo released her eponymous titled debut album in June 2004, "Leave (Get Out)", her debut single, became number one on the Billboard Pop songs chart, which made her the youngest solo artist to have a number-one single in the United States, at thirteen years old. She starred in the Lifetime Television film True Confessions of a Hollywood Starlet in 2008. 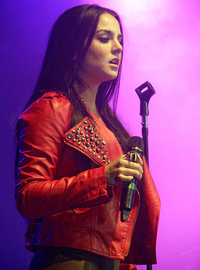 image credit
JoJo (singer) by Jenna, is licensed under cc-by-2.0, resized from the original.