John Herndon "Johnny" Mercer (November 18, 1909 – June 25, 1976) was an American lyricist, songwriter and singer. He was also the founder of Capitol Records. He is best known as a lyricist, but he also composed music. He was also a popular singer who recorded his own songs as well as those written by others. From the mid-1930s through the mid-1950s, many of the songs Mercer wrote and performed were among the most popular hits of the time. He wrote the lyrics to more than fifteen hundred songs, including compositions for movies and Broadway shows. He received nineteen Academy Award nominations, and won four Best Original Song Oscars. 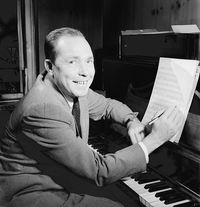