John Joseph Travolta (born February 18, 1954) is an American actor, dancer, and singer. Travolta first became known in the 1970s, after appearing on the television series Welcome Back, Kotter and starring in the box office successes Saturday Night Fever and Grease. Travolta's acting career declined through the 1980s. His career enjoyed a resurgence in the 1990s with his role in Pulp Fiction, and he has since continued starring in more recent films such as Face/Off, Ladder 49, and Wild Hogs. Travolta was nominated for the Academy Award for Best Actor for Saturday Night Fever and Pulp Fiction. He won the Golden Globe Award for Best Actor - Motion Picture Musical or Comedy for his performance in Get Shorty. 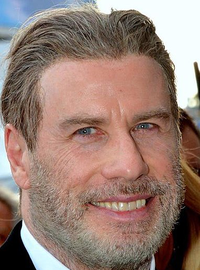 image credit
John Travolta by Georges Biard, is licensed under cc-by-sa-4.0, resized from the original.