Jonathan Southworth "John" Ritter (September 17, 1948 – September 11, 2003) was an American actor, comedian, and voice-over artist. Ritter was best known for playing Jack Tripper on the hit ABC sitcom Three's Company, for which he won an Emmy and a Golden Globe Award in 1984. He was the son of famous country/western star Tex Ritter, and the father of actor Jason Ritter. 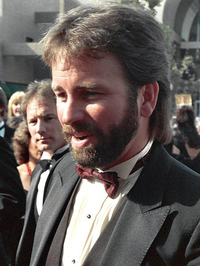 image credit
John Ritter by Alan Light, is licensed under cc-by-2.0, resized from the original.