David John Moore Cornwell (born 19 October 1931), pen name John le Carré /lə ˈkɑrˌeɪ/, is a British author of espionage novels. During the 1950s and the 1960s, Cornwell worked for the British intelligence services MI5 and MI6, and began writing novels under a pen name. His third novel The Spy Who Came in from the Cold (1963) became an international best-seller, and it remains one of his best-known works. Following the success of this novel, he left MI6 to become a full-time author.Le Carré has established himself as an important writer of espionage fiction. In 1990, he received the Helmerich Award which is presented annually by the Tulsa Library Trust. In 2008, The Times ranked Le Carré 22nd on its list of "The 50 greatest British writers since 1945". In 2011, he won the Goethe Medal, a yearly prize given by the Goethe Institute. 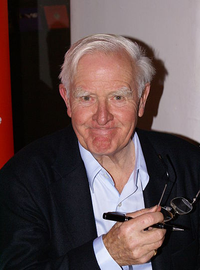 image credit
John le Carr by Krimidoedel, is licensed under cc-by-3.0, resized from the original.