John Keeble (born 6 July 1959 in London) is a British pop musician, who is the drummer with the 1980s new wave band, Spandau Ballet.Spandau Ballet disbanded in 1990, after their final studio album, Heart Like a Sky, failed to live up to the critical and commercial success of their earlier albums, such as True and Parade.In 1999, John Keeble, along with fellow band members Tony Hadley and Steve Norman, attempted to sue former Spandau Ballet guitarist, Gary Kemp, for alleged unpaid royalties. On 25 March 2009, John Keeble joined the rest of his original classic-line-up Spandau Ballet bandmates for a press conference at HMS Belfast, to announce that the band had reformed for a world tour starting in Dublin in October 2009. 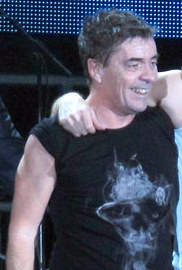 image credit
John Keeble by Andrew D Hurley, is licensed under cc-by-sa-2.0, resized from the original.