Joseph Michael "Joe" Manganiello (/ˌmæŋɡəˈnɛloʊ/ MANG-gə-NEL-oh; born December 28, 1976) is an American author, director, producer, film and theatre actor. He holds a BFA in acting from the Carnegie Mellon School of Drama. He played Flash Thompson in the original Spider-Man film series, and had various recurring roles in television on ER, How I Met Your Mother and One Tree Hill, before landing his breakout role as werewolf Alcide Herveaux on the HBO television series True Blood for which he has garnered both popular and critical praise. Aside from his work life, Manganiello is active with several charities including Children's Hospital of Pittsburgh of UPMC and he serves on the committee of the Los Angeles-based The Art of Elysium. 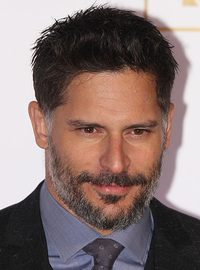 image credit
Joe Manganiello by Eva Rinaldi, is licensed under cc-by-sa-2.0, resized from the original.