Margaret JoBeth Williams (born December 6, 1948) is an American film, television and stage actress and director. She rose to prominence appearing in such films as Stir Crazy (1980), Poltergeist (1982), The Big Chill (1983), The Day After (1983), Teachers (1984) and Poltergeist II: The Other Side (1986). She has also performed in numerous other roles. She has been nominated for Oscar, Golden Globe and Emmy Awards. Williams is the current president of the Screen Actors Guild Foundation. 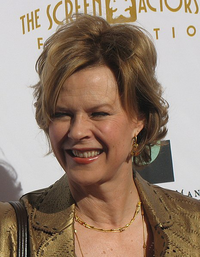 image credit
JoBeth Williams by maggiejumps, is licensed under cc-by-2.0, resized from the original.