João Félix Sequeira ([ʒuˈɐ̃w ˈfɛliks];[n 1] born 10 November 1999) is a Portuguese professional footballer who plays as a forward for La Liga club Atlético Madrid and the Portugal national team. He is known for his speed, finishing, creativity, acrobatic abilities, technique, and dribbling, and can also play as a winger or an attacking midfielder. He is also often referred to as Menino de Ouro (The Golden Boy) by the Portuguese and Spanish sports media. 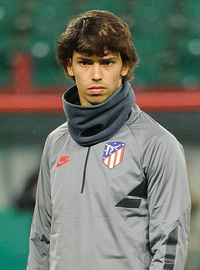 image credit
Joao Felix by Анна Нэсси, is licensed under cc-by-sa-3.0, resized from the original.