Joan Smalls Rodriguez (born July 11, 1988) is a Puerto Rican fashion model. She is currently ranked the #1 model in the world according to models.com since September 2012. She also ranks at number #8 on Forbes: The World's Highest-Paid Models, 2013. In 2011, she became the first Latina face of Estée Lauder Cosmetics history. In January 2014, Smalls graced the cover of American Elle, the issue was touted as "The Return of the Supermodel".Joan Smalls Rodriguez was born and raised in Hatillo, Puerto Rico. She is the daughter of Eric Smalls, an accountant, and Betzaida Rodriguez, a social worker. 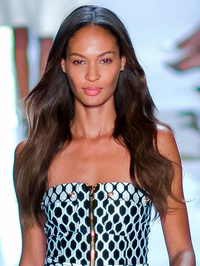 image credit
Joan Smalls by CHRISTOPHER MACSURAK, is licensed under cc-by-2.0, resized from the original.